Okay, If you are here it’s because you saw the title and thought “I don’t want to do one those guys are doing and I definitely don’t want my main WhatsApp number to be banned

Because you don’t want to be like this guy 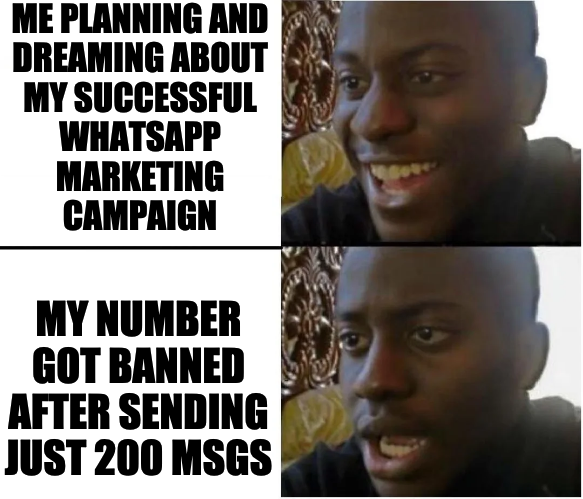 5 types of people that get banned by WhatsApp

Read this till the end, or you will make the same common mistakes and end up like the guy in this picture

1. People who use Bulk WhatsApp as if it’s bulk SMS

Here is the message Rakesh sends to all his contacts. 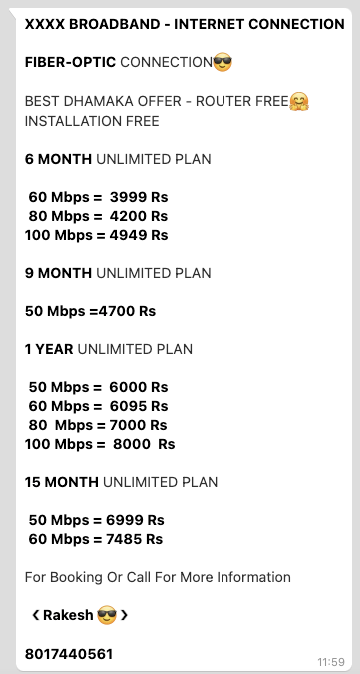 He is making the most common WhatsApp marketing mistakes. ”Using WhatsApp to spam his contacts in hopes of selling more”

This message is just like one of those hundreds of promotional messages in your inbox which either remain unseen or are plainly ignored.

For example – this message

The bank clearly gives zero fucks about the fact that I don’t even have an account with ICICI bank. Hence I don’t care whatsoever about some new features in their app

Similarly, the above message that Rakesh is sending would be useful to the receiver only if he’s looking for a new Internet connection or he has problems with his current vendor. But if he is not then that message is totally useless spam.

And what happens when you blindly spam hundreds of thousands of people on WhatsApp like it’s Bulk SMS?

Many people report your number and WhatsApp bans your number from their platform within a matter of hours! Or even minutes!

Here is the message that Rakesh should send instead

This message still has one missing part to make it perfect. Which we will cover in the next sections!

2. People who want to get rich quick

Yes that’s right! 7 out of the 9 people replied to that simple hi

This proves that WhatsApp is a high engagement platform.

Almost 100% of the messages get delivered.

An insanely high percentage of people reply. (75% in this case)

Hence WhatsApp has insanely high potential as a marketing medium.

But once people realize this, instead of using it wisely, they send messages like this one from Ronnie

Yes! people see all their WhatsApp messages and mostly even reply.

That doesn’t mean they will refer their friends to invest lakhs and crores just because some random stranger is offering them Amazon vouchers worth Rs.500

What’s wrong with this message? 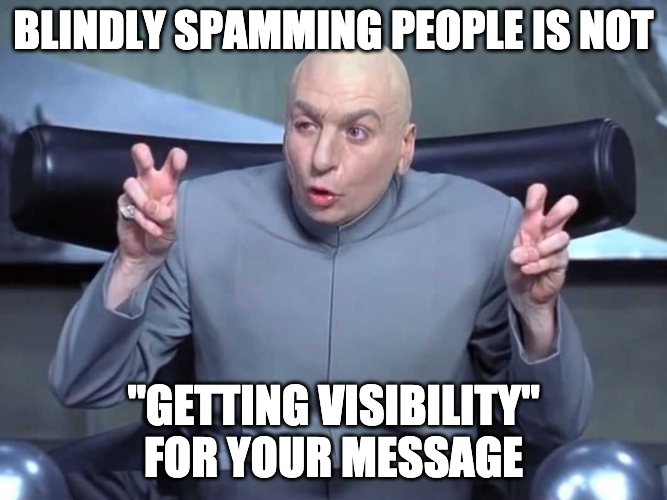 What to do instead?

See those 3 buttons in the convenient reach of my thumb?

If just four or five people click on the report or block, you are done.

Your number will be banned from WhatsApp.

But the second time onwards it will be permanent!

What to do instead?

If you just get one reply from them, the 3 buttons disappear! and then they only see a tiny block button on the top 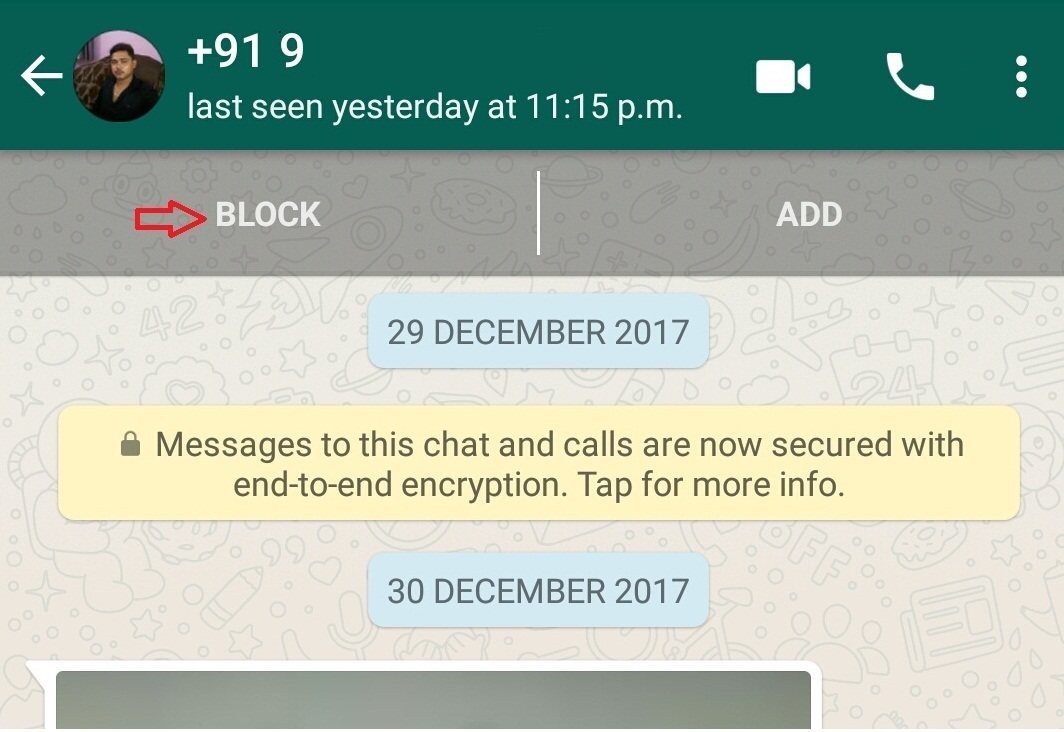 Now if you have two of these buttons in front of you – one- tiny, on the top, and even hidden vs the other big and within the convenient reach of your thumb, which one are you more likely to click? 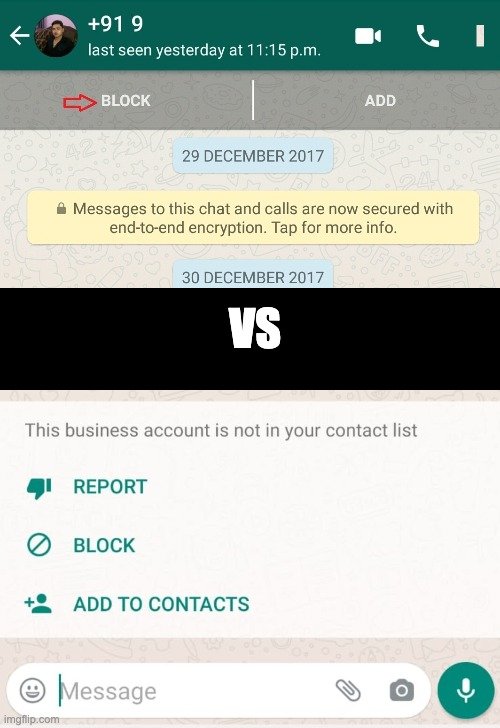 Just follow this step-by-step process, and I can pretty much guarantee that you will be safe

4. People who don’t understand the importance of crafting a valuable message

What’s wrong with this?

Here’s the message that we send now 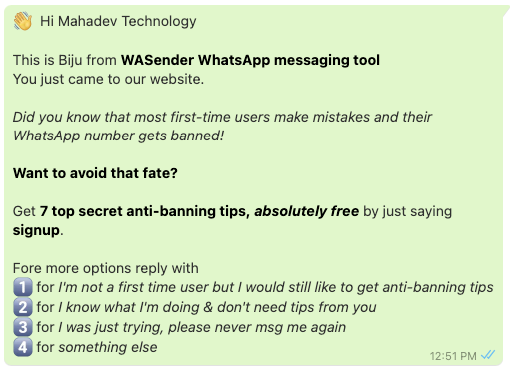 Why & how this is better.

These first-time users tend to make the comment first-timer mistakes, which gets their number banned. Only because they are not aware of the official WhatsApp policy and system

Here are reasons why this is a killer message 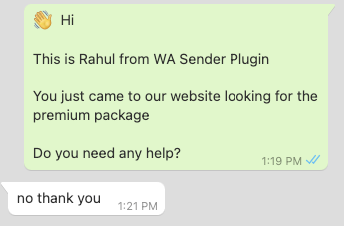 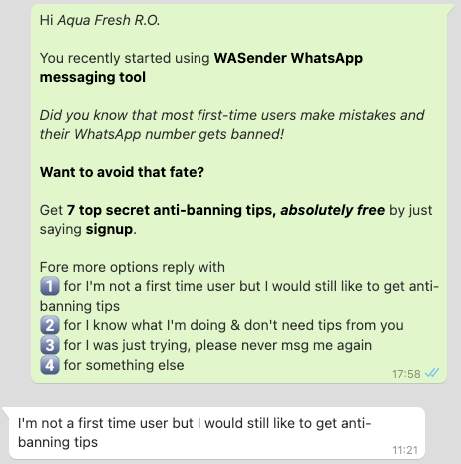 As you can see people are literally taking the time to type or copy and paste the response. That my friend is not a small achievement!

That’s the only time you get a response like this!

And if you can present your solution to that problem, you will sell like hotcakes. Without even trying to.

Of course, there is the option of going back to lazy and blind spamming.

Hoping that people respond to begging by buying instead of reporting…

But we all know what happens to people who do that…

5. People who want to take, take, take without giving anything 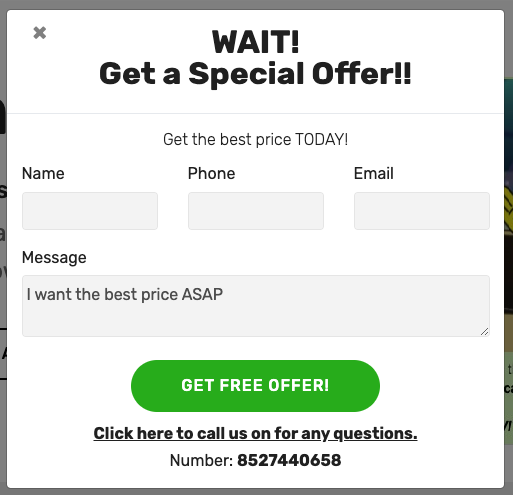 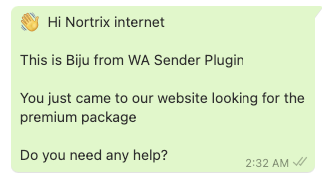 Why this is Wrong

We are basically saying – 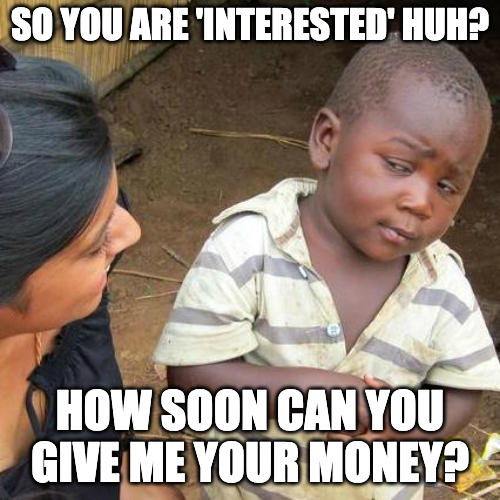 Would you ever trust someone who is interested only in your money and not your problem?

Here is the message we send now 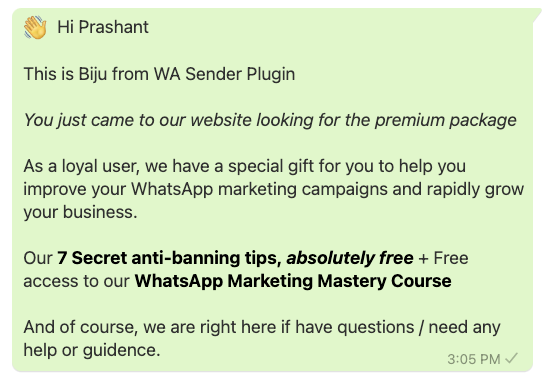 Our product is so awesome we don’t even have to try to sell!
In fact, this message is basically us saying – let’s forget about that for a moment, btw here’s a killer freebie for you

Have so much value in your product that you don’t actually have to push for sales
After that, DON’T engage in BLIND SELF PROMOTION.
Instead, figure out what their problems are, and how you can solve those problems with content!

I’ll give you an undeniable example

We have a killer product that sells like hot cakes entirely on automation.

In fact, it works so well that sometimes people don’t even care about number banning… and go on to buy pro even after one or two of their numbers are banned!

So why do you think we take so much pain to create 2000 word articles just to educate our users on how to get fantastic results without getting their number banned?

Because people may buy from ‘vendors’ when they ‘need’ something

But when you genuinely help them solve THEIR PROBLEM, they trust you…

And when they trust you, they will buy anything from you without having to think twice…

Sign up to receive get regular WhatsApp marketing hacks & tricks

No comments to show.